A herniated disc, also known as slipped or ruptured disc, occurs when the soft interior soft cushions or discs of the spine push through to the spine's vertebras.

In some cases, a herniated disc may not produce any noticeable symptoms, and may be detected by a doctor before a patient notices an issue. However, often herniated discs can cause lower back pain or neck pain.

Other herniated disc symptoms include:

What Causes a Herniated Disc?

A herniated disc is often caused by degeneration that's related to aging and overuse. As people get older, the spinal disk becomes less flexible, making the spine more susceptible to tears or rupturing.

What Happens if a Herniated Disc Goes Untreated?

In many cases, a herniated disc, if left untreated, can result in serious health problems. Symptoms, such as pain, numbness or weakness, can reach debilitating levels. Similarly, feeling can be lost in the inner thighs and other areas.

How Spine Surgeons Can Help with a Herniated Disc

Many people who suffer from a herniated disc do not need spine surgery.

Depending on the severity of symptoms, treatments may include physical therapy, pain medications, anti-inflammation medications, or local injection (epidural injections). However, in serious cases, spine surgery may be necessary. There are several surgical approaches to treat a herniated disc, including minimally invasive surgery.

For more information or to schedule an appointment with our specialists, please call (315) 701-2550. 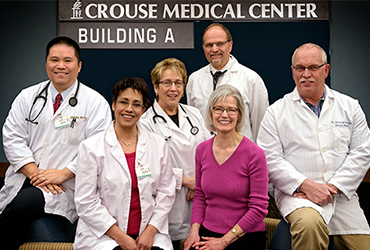 Our doctors provide the best possible care for a wide variety of health problems. The Crouse Medical Practice team includes experienced medical specialists who have helped diagnose, care for and treat patients, providing individualized care for the unique health concerns of each patient. Experience the difference with capable, compassionate care from Crouse Medical Practice.